Mount Everest is the main epitome of beauty itself. Standing high at the altitude of 8848m, Mt Everest is the highest peak in the world. It can be reached from both the countries of Nepal and Tibet, China. In Nepal, it is called Sagarmatha, whereas it is known by Chomolungma in Tibet. The one in Nepal is situated at the Khumbu Glacier on the eastern side of the country, whereas the one in Tibet is located at the Rongbuk Glacier.

Stepping on the tallest mountain on earth, Mt Everest is a dream come true which was made possible and achievable by Edmund Hillary and Tenzing Norgay, who climb the Everest on May 29, 1953.

The South Base Camp is located in Nepal, with the highest point of 5,364m/17,598ft in the Himalayas. The camp is higher than the North Base camp, which offers a journey through the Sagarmatha National Park, UNESCO World Heritage Site. Along with the beautiful view of Khumbu Icefall to the base camp area’s right, encounter the Everest and the neighboring peaks on the way. The South Ridge offers beautiful and breathtaking views of Mt Everest (8848m/29029ft), Lhotse (8516m/27940ft), Nuptse (7861m/25791ft), Ama Dablam (6812m/22349ft) and Pumori (7161m/23494ft).

5 Amazing facts about Everest Base Camp

2. Busiest place during the peak period: The base camp is on top of the Khumbu Glacier, making it obvious that there is a huge flock of people coming to the area. Also, since the base camp is on top, it is more interesting as you can see ice pinnacles, meltwater pools, sinkholes, or even an avalanche.

Elevation of Everest Base Camp

The Everest Base Camp, which is located in Nepal, is about 5364m/17598ft high. The oxygen level is at 50%, so more safety measure has to be taken to reduce altitude sickness. People generally get altitude sicknesses such as nausea, heavy breathing, fatigue, blue lips/nails, and many more from the elevation of 2500m. Thus, safety precautions have to be taken properly to avoid any severity.

The best time at the Everest Base Camp is during the spring (March to May) and autumn (September to November). The South Base Camp is mostly visited during these seasons due to clear weather and less cold. It is perfect for photography, where the sky is clear and blue. The visibility of the peaks is perfect for observing and soaking in the beauty. The clear blue sky and better road conditions attract trekkers from all over the world.

The weather has a moderate climate during the peak season of spring and autumn; there is a huge flock of people worldwide. However, at the altitude of 5,364m/17,598ft from the sea level, Everest Base Camp has a mountain plateau climate which can be cold all-round the year.

Everest Base Camp in four seasons

Spring (March to May): The spring is one of the best times of the year where the climate is warm with bright and clear skies. The mountain can be seen clearly along the trails.

The temperature profile is given as:

Monsoon (June to August): During this season, there are higher chances of rainfall than any season of the year, making the trails wet and slippery. The foggy climate makes the visibility of the mountains less clear.

Autumn (September to November): The autumn season is another best time to visit the Everest Base Camp where the skies are clear, and the landscape is greener and lush. The cold and strong winds make the temperature cooler, and the summits of the peak can be seen clearly.

Winter (December to February): This is the coldest season at the Everest Base Camp. The skies are clear with bright sunshine.

How to reach Everest Base Camp?

You can reach Everest Base Camp in two ways:

If you prefer a challenging yet exciting journey, then you can opt for trekking, which has three main routes, as given below.

8 Days journey to Everest Base Camp from Lukla

This route takes 9 to 15 days to complete depending on your choice of attractions and places to visit. Generally, the trek starts and ends with a drive from/to Kathmandu with 2 days for acclimatization in Namche Bazaar and Dingboche. An average of 6-7 hours of the daily walk is done to reach the Everest Base Camp. An outline is given below:

12 Days trek from Phaplu to Everest Base Camp

Alternate to the traditional route is Phaplu Everest Base Camp Trek. The trek starts from a drive to a scenic village of Phaplu from Kathmandu. Continuing from Nunthula, Bupsa, reach Phakding from the Everest Base Camp Trek starts. You get 2 days for acclimatization in Namche Bazaar and Dingboche. You have to walk for an average of 5-6 hours daily.

14 Days walking from Jiri to Everest Base Camp

Jiri to Everest Base Camp trek is the route used by Sir Edmund Hillary and Tenzing Norgay Sherpa to summit the peak during the 1950s. The trek starts from Kathmandu to Jiri to Lukla, where the traditional route adds up. This is the longer trekking trail where you get 2 days for acclimatization in Namche Bazaar and Dingboche. You have to walk for an average of 5-6 hours daily.

Everest Base Camp by helicopter

For individuals who prefer a relaxed journey can opt for a Helicopter.

Everest Base Camp Helicopter Tour is easy and great for people who do not have much time to trek for many days. The thrilling tour rewards you with close views of mountains peaks. The flight gives you a chance to enjoy the 360-degree views of Everest and neighboring peaks and landscapes.

Do I need permit to visit the Everest Base Camp?

Yes, you need to issue two permits to visit the Everest Base Camp i.e., Pasang Lhamu Rural Municipality Permit at US$20 and Sagarmatha National Park Permit at US$34.

These permits can be issued at Nepal Tourism Board, Kathmandu, or can be available in various checkpoints on the routes.

However, if you want to continue your journey and climb Mt. Everest, you need to issue a Special Expedition Permit, which costs around US$11000. The climbers must have previous experience of high-altitude mountaineering and demonstrable training. They should also submit proof of good physical and mental health and be accompanied by a licensed Nepalese guide. 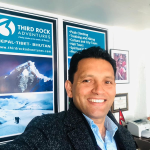 Naba Raj Amgai, stepped into the world of travel and tourism in 1996.

Beginning his journey in the tourism industry as a humble Porter Guide to founding hospitality establishments and an adventure travel company, he has come a long way.

In a career spanning more than two decades he has achieved more than anybody dreams of achieving. Along with his professional achievements, his selfless contribution towards his community and society has won him a lot of accolades and praises.

Having dedicated more than two decades in the tourism and hospitality sector, he has amassed a wealth of experience.

After passing high school, he began helping out some trekking guides and was soon recruited as a porter guide at a reputed trekking agency. Within a short period of time he was individually guiding clients across the well-known trails of the Himalayas.

He went on to lead tour groups on multi-country tours to Nepal, Tibet, Bhutan and India. Being a part of mountain climbing expeditions familiarised him with expedition logistics and operations. Later on he went to become the Executive Director and took over the reins of Operations, Sales and Marketing departments. Spending several years in the tourism field has made Naba Raj Amgai a destination expert.

Travelling is his passion and he has been to many countries across the world – USA, Canada, Australia, Japan, Holland, Germany, Austria and many parts of Asia.

His journeys to different parts of the world have enriched his travel experience and knowledge. This experience has been instrumental in planning and organising successful trips for several clients.

As of today many reputed trekking agencies, hotels and restaurants are under his leadership. A dynamic and proactive leader, he continues to inspire and motivate people from all walks of life.